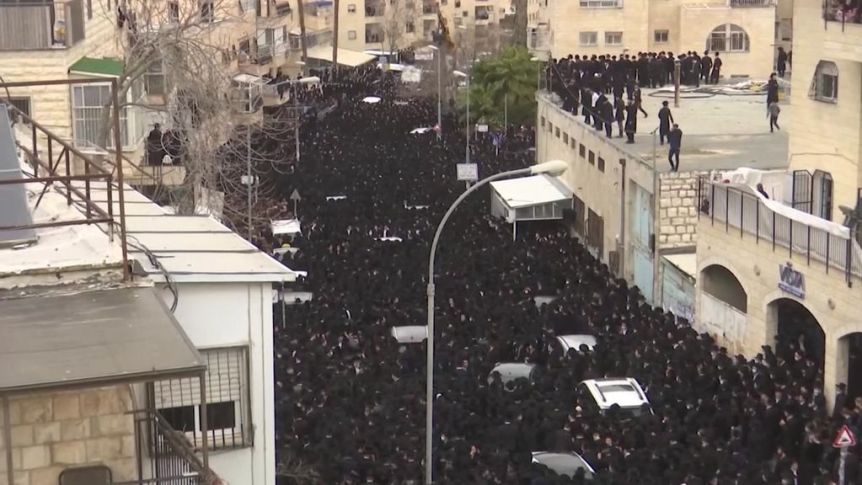 The massive funeral took place in the western part of Jerusalem, where several thousand ultra-Orthodox youths without masks could be observed around the vehicle that transported the body.

Thousands of ultra-Orthodox Jews have attended the funeral of an important rabbi in Jerusalem , who died of coronavirus , in clear violation of the confinement that has been in force for more than a month in Israel and is expected to be extended today by the Executive.

The massive funeral took place in the western part of the city, where several thousand ultra-Orthodox youths without masks could be observed around the vehicle that transported the body of Rabbi Meshulam Dovid Soloveitchik , who died this morning at the age of 99 after fighting for months against disease.

The attendees went to the Har Hamenujot cemetery , where he is scheduled to be buried this afternoon, in a ceremony that is also expected to be massive. ç

This episode adds to a long list of violations of restrictions by sectors of the ultra-Orthodox community in Israel , which has the highest morbidity rate in the country and which in recent weeks has starred in multiple clashes with the Police, after refusing to abide by the rules of confinement.

Current regulations impose the closure of the educational system, which many ultra-Orthodox schools have not respected, and of all non-essential work activities, as well as a limitation to movement no more than one kilometer from home and a maximum of five people in indoor meetings and 10 outdoors, among others.

The confinement came into force at the end of December and expires this midnight, although the Executive is expected to approve an extension today, which will depend not only on health recommendations but also on political negotiations between the two main parties that make up the Government.

Since last week, the almost total closure of Ben Gurion International Airport has been added to the general closure , which in principle would reopen tomorrow, although it is possible that this will also be extended for a few more days.

The country is currently in what the authorities have described as a race between the spread of infections, contained by confinement but aggravated by the arrival of new strains of the virus , and a swift vaccination campaign.

The latest figures indicate that Israel, with nine million inhabitants, has registered more than 640,000 cases of coronavirus since the beginning of the pandemic, of which 72,000 are still active and 1,162 are seriously ill.

On the other hand, more than three million people have already received the first dose of the Pfizer vaccine and about two million also the second, which maintains the country as the world leader in percentage of inoculated population.